If you can think back to start of the year ( which seems a life time ago now !)  we held a club survey to hear your ideas about what you would like from your membership in the future.

Although we are currently going through an unusual time, we wanted to share the outputs with you all so you can see what we are planning to do based on your responses – when we are able to!  A short summary, along with the full results can be accessed by following the links below for those of you who would like to look at the details.

Thanks again to everyone who took the time to participate.

6th May 2020 was the 66th anniversary of Roger Bannister being the first man to run a mile in under four minutes. In honour of this anniversary a club one off ‘virtual’ 1 mile competition was held. Club members were invited to run a 1 mile course from home, and to submit their times; 44 athletes took part and many impressive performances  were achieved over this unusual distance. Fastest man home was Dan Floyd; fastest woman was Esther Hunt. Results can be viewed by clicking the link below. 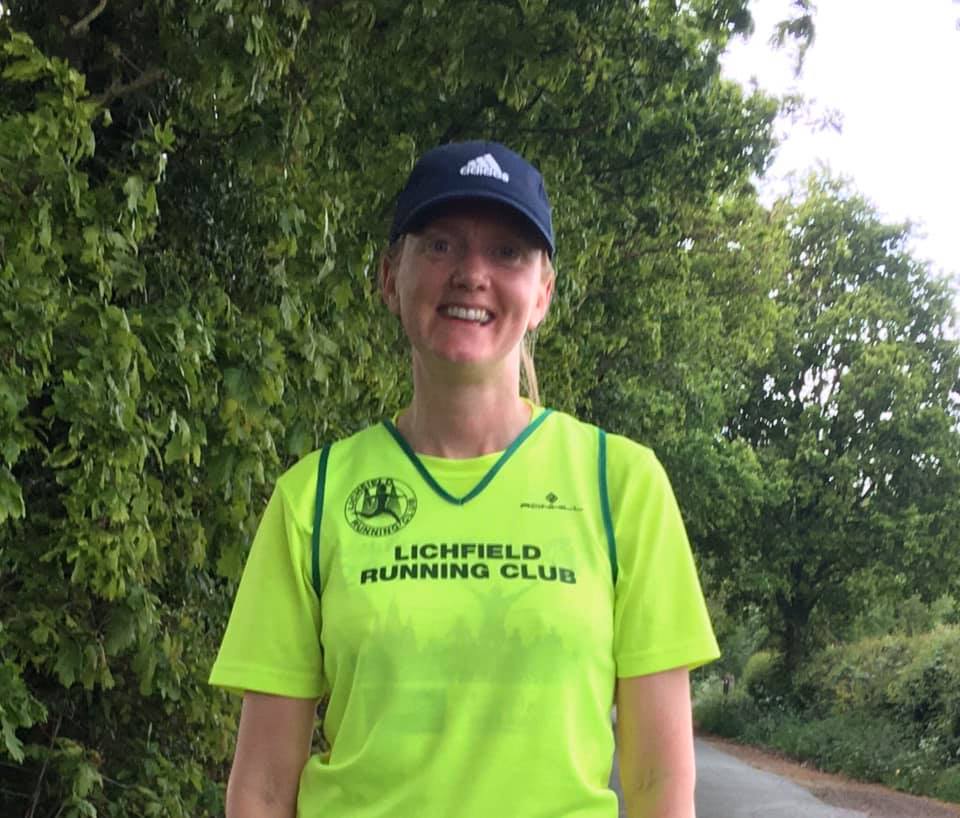 The Stafford Half Marathon attracted an impressive field of over 1,800 runners, including 20 from Lichfield Running Club. The event was extremely well managed and organised, and the atmosphere upbeat throughout the 13.1 mile route. Along the way there were various moments of surprise support from non-running Lichfield members who spurred competitors on, along with members of the public, undeterred by the damp weather.

First home for the club was Daniel Floyd, finishing in 17th position overall, followed by James Coombes and Joe Goodwin.  First female back was Lauren Foulds, followed by Radhika McCathie. Special mention goes to Melissa Farmer, who ran her first half (in place of the cancelled London Landmarks Half Marathon) a few weeks ahead of schedule, raising money for her chosen charity, Tommy’s, in the process.

Huge congratulations to everyone who took part. Great efforts, great results and a great event. 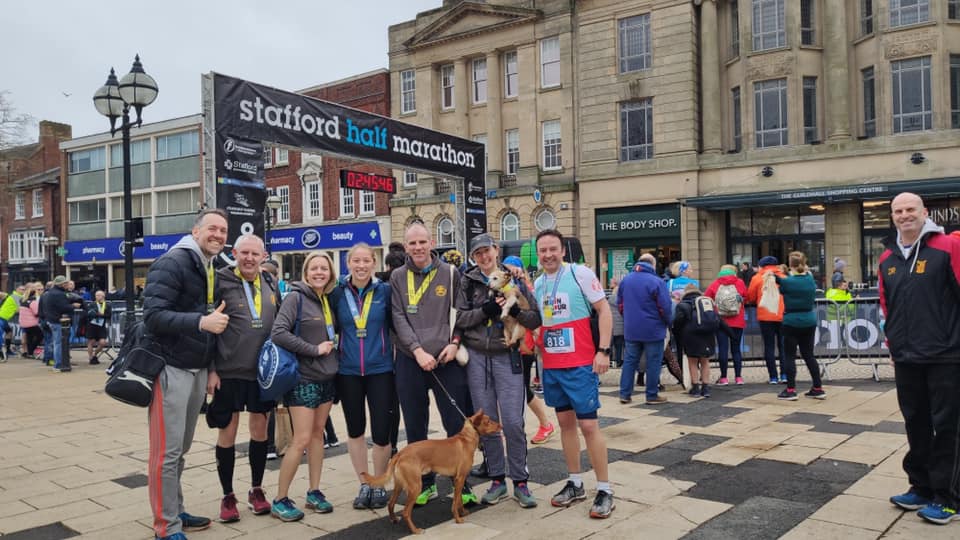 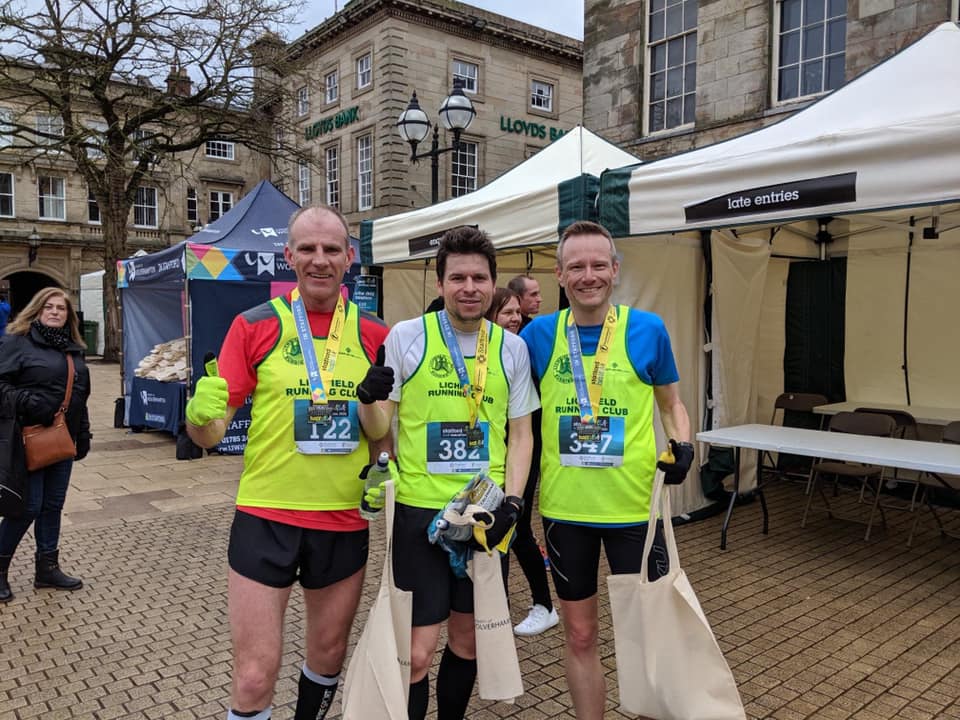 Sunday 8th March saw the  first race in the Grand Prix  for 2020! It was a great sunny morning at Fradley 10k, not quite as gusty as last year!

Well done to all 20+ LRC members who took part; there were great performances all round, with  PBs achieved and lots of big smiles! 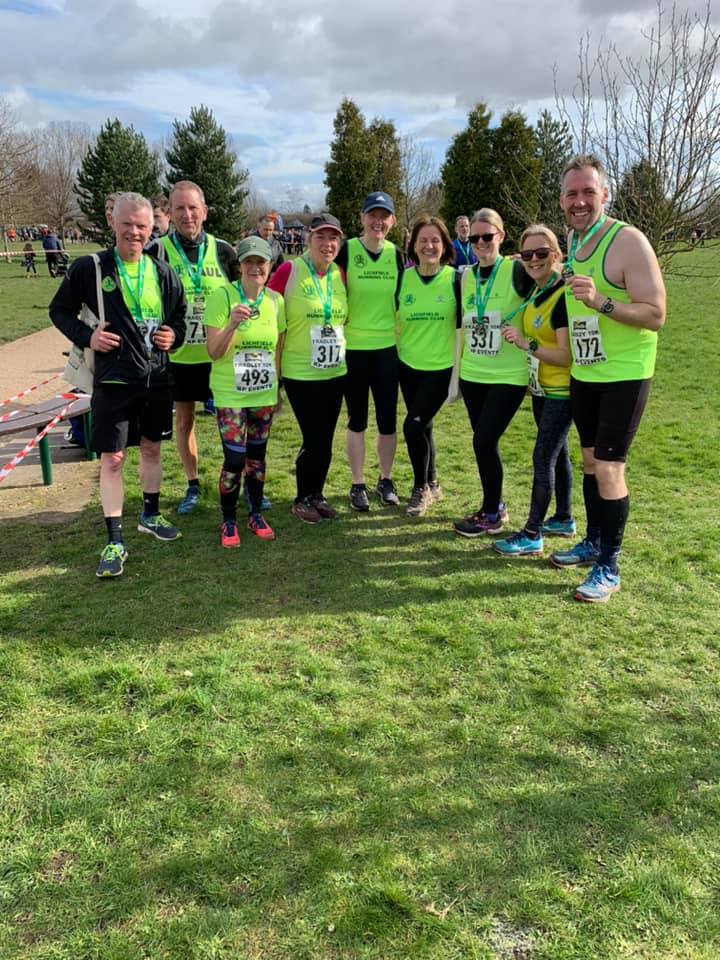 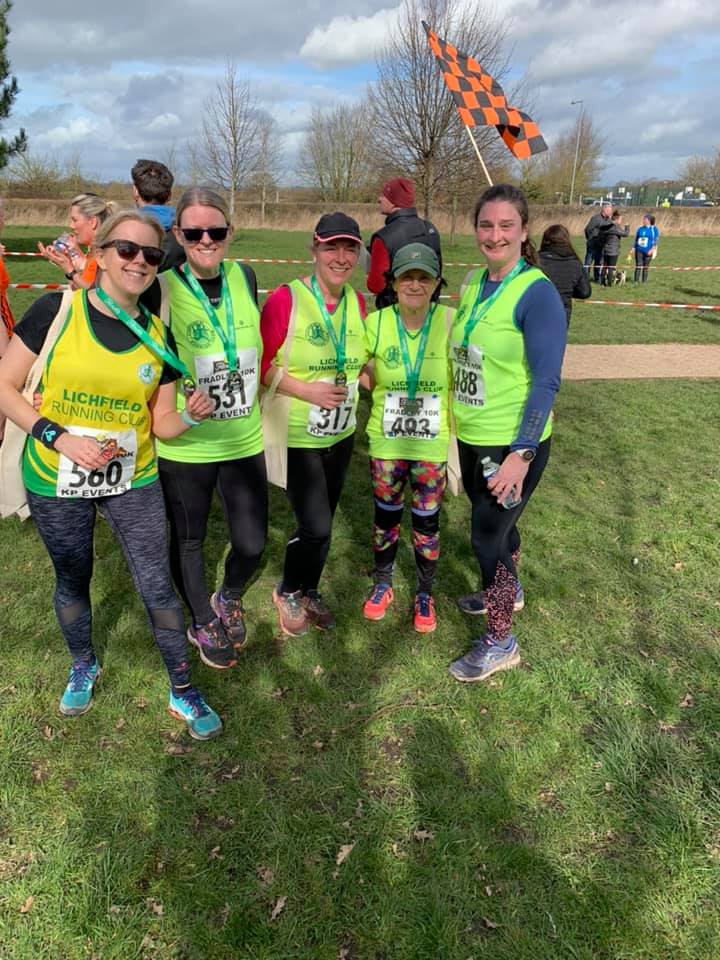 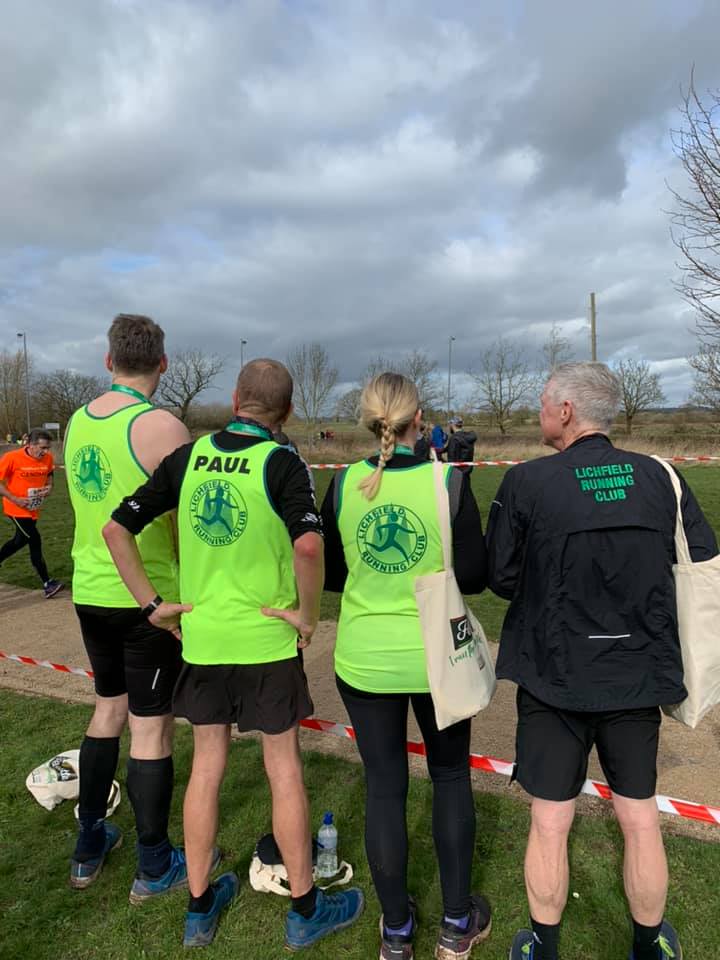 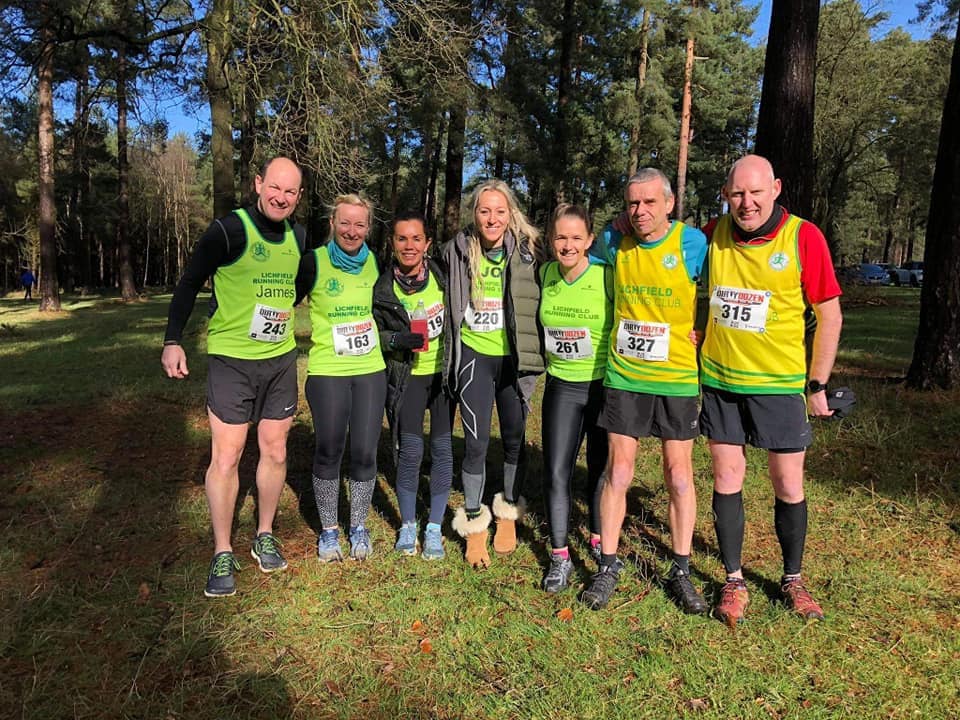 There was a good turn out from LRC for race 2 of the Off Road Series, the Dirty Dozen, on Cannock Chase on 29th February. Last year there were perfect conditions for the run as it took place on the warmest February day on record. This year was much colder, muddier and slippier as Storm Jorge hit the Chase and there was a bit of snow in the air.It was also a new route and at 14.5 km was a bit longer than the dozen km it was supposed to be. The ‘Ditch of Doom’ was colder and fuller than ever and was a struggle to get out of: a rubber duck was spotted in it when Yvonne, Jo and Emma swam through. Well done to everyone from LRC who took part. It was a tough race! 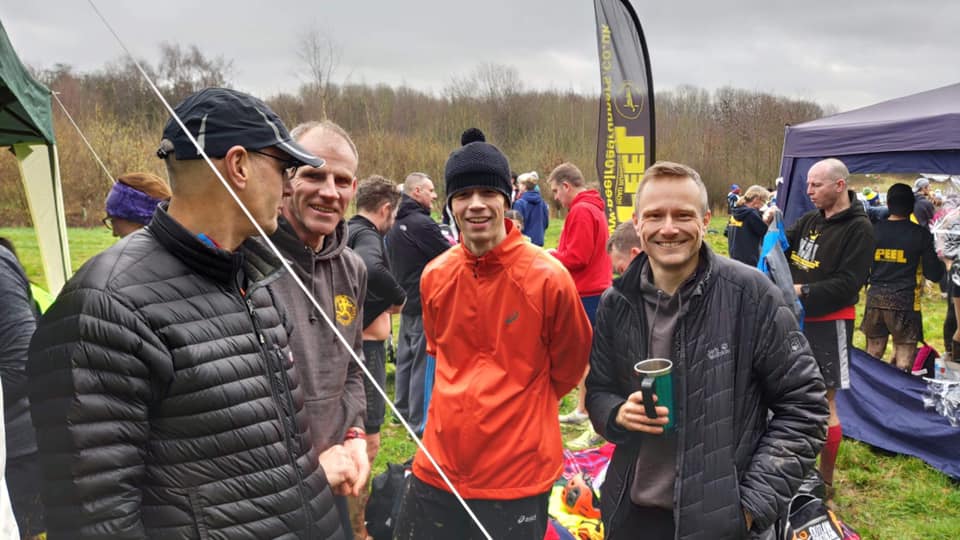 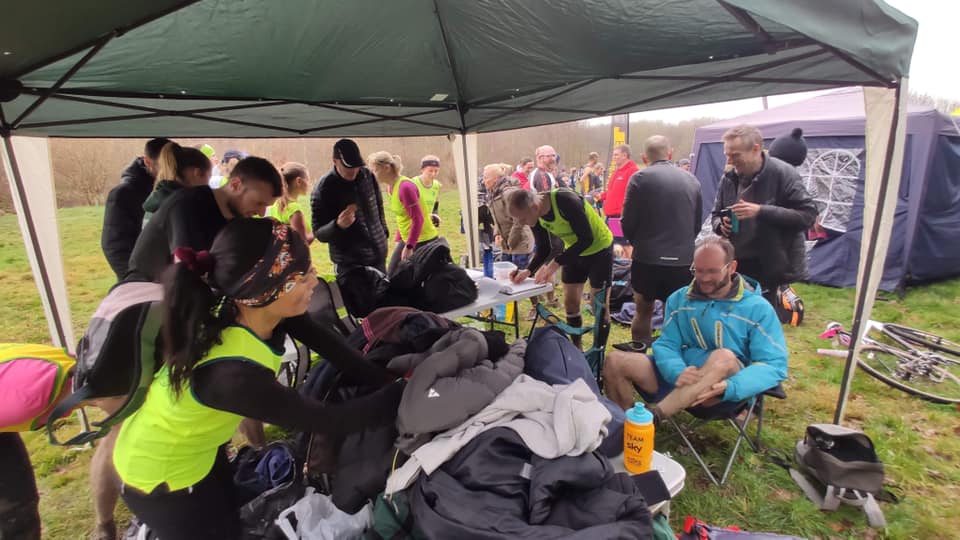 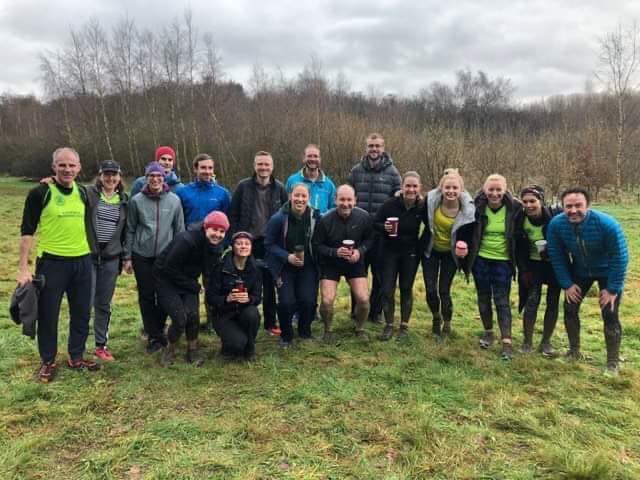 Cross Country was introduced to the club by Daniel Floyd in the autumn of 2017. Daniel managed to enrol the club in a new league organised by the Derby Runner, which was open to clubs from Staffordshire and Derbyshire. It’s a closed league, so only members of running clubs can take part. Guest runners can enter, but they cannot score team points.  Although races can be competitive, they are fairly low key events with a good, friendly club atmosphere. They  are well organised, with clubs taking part in the league encouraged to take on marshalling and timekeeping duties at one event per season. The league is made up of 6 rounds with your best scores from 3 events counting towards the final results.

Whilst cross country is seen as an event for just fast runners, nothing could be further from the truth. It’s a team game and very inclusive. The idea is to get as many runners in our team as possible. Yes, it helps to have fast runners, but it’s just as important to have mid-packers and tail-enders. It’s a numbers game. For each race we need a bare minimum of: 8 men (including 2 vets) and 4 ladies (including 1 vet). There is also a mixed team event consisting of 7 men (including 2 vets) and 2 ladies (including 1 vet).

Unlike other races, the results of cross country are based on your finishing place, not time. The finish places are added up and the team with the lowest number wins. Even if you don’t finish in the top 8 men or top 4 ladies, you are still helping the team by pushing our competitors down the finishing order. Therefore it is vitally important we put out full teams, but it’s made much easier for everyone if there are greater numbers involved as there is no maximum limit to a team.

The team spirit that has developed over the course of this season is something we are all very proud of. The team event lends itself to developing a good social aspect to racing that a lot of our runners have thrived on. If you thought that all you needed were a pair of trainers to go running, think again. Cross country demands that you bring with you a mug for your post-race hot drink and cake or biscuits for us all to share. We also have runners who bring their own camping chairs, tables and gazebo to provide more comfortable surroundings for pre and post-race chats.

We have witnessed some very good performances this season. Matt Orford, who has managed two wins from two races, Esther Hunt and Joseph Goodwin who have both consistently finished in the top 10 have been stand out individual performers. Collectively we have all shown great improvement as the season has gone on, something that has put Lichfield Running Club in the mix for trophies that will be decided at the last event of the season at Sinai Park, Burton on 8th March.

So, if you want to try something different (and it will be different), give it a go. The season runs from October to March. Races are all off road, between 5 to 6 miles long and cost £5-6. The events are properly marshalled and courses are always well marked out. There is a good team spirit going and it will definitely help improve your fitness over the winter months, regardless of running ability.

Friday 19th January saw the annual LRC awards evening, after competition results were announced at the December AGM. The evening also saw the club say an official thank you and goodbye to outgoing president Dave Nason, one of the founding members, as he moves away from the area. We are all massively grateful for Dave’s contribution.
.
The two surprise awards of the evening were those voted for by members. Claire Wheat won greatest running achievement for her amazing feats as someone who has come to running in later life and excelled in her age category over all distances this year. Andrew Parker won greatest contribution for the second year, for the significant work he has done around coaching and development across the club, and current work with new members and beginners. 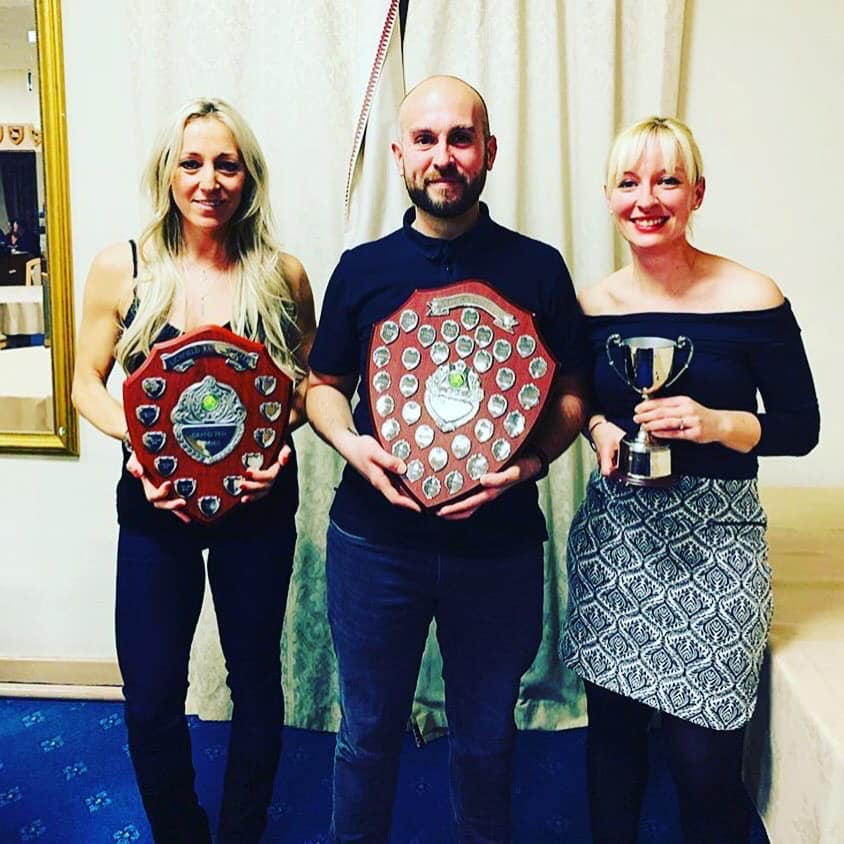 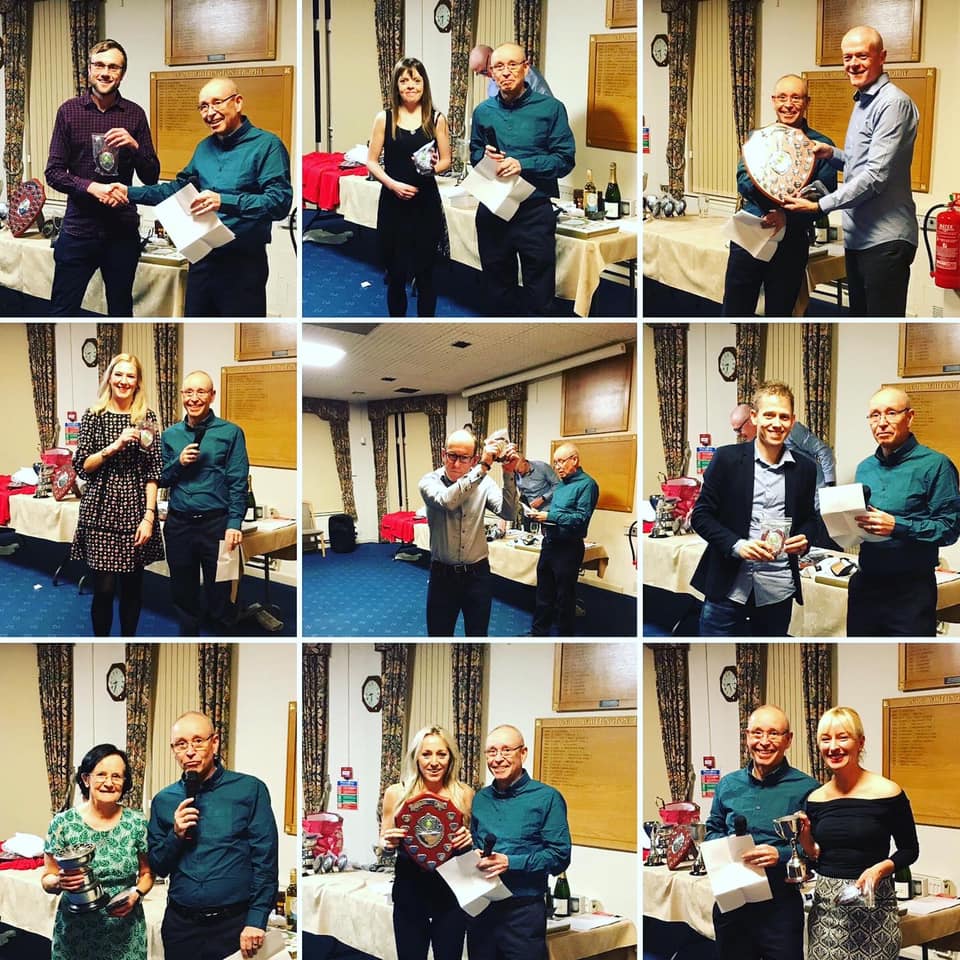 Happy New Year to all!

Here’s a brief summary of the AGM, held in November:

It was confirmed that we have 161 members, which is excellent.

There have been a few changes in personnel at club director level, the main one being our previous chairman, Alan Pritchard, leaving and me, Martin Shortall, taking on the role. Ann Schwarzenbach was elected as secretary and Andy Parker has replaced Ann as membership secretary. Our current president, Dave Nason, confirmed he was stepping down as he and his wife are moving out of the area. Dave was the last of the original members and will be dearly missed. He doesn’t like a fuss, so I will just say, on behalf of the club, a big ‘thank you’. Chris Cox will take up the position of president and Cliff Cartwright will become vice president. Finally, I want to share our thanks to our current committee, without whom we could not run the club, and a welcome to Jon Wolfe, Jo Palmer, Maria Brown and Marian Lowther. The majority of the new committee members, together with others, run the ‘Comms Team’, which continues to do a fantastic job.

The results of the club competitions were confirmed and winners’ trophies will be handed over at the presentation night, Friday 17th January. Well done to everyone.

It has been agreed by the committee that the club should join the Burton & District League for the 2020 season, in order to add variety to the coming year.  This in turn will change our Grand Prix (GP) events, leaving out some popular local races, and introducing some new ones. The full list of GP League races, as shared at the AGM, is now published on the website. As a result of feedback about the changes, we have revisited the list and tried to fit in a couple of the popular local races. Aldridge 10km was added, but it was decided not to include Lichfield Half as it is only one week after another half marathon at Uttoxeter. This does not stop anyone from entering the Lichfield Half, which we know is very popular.

Moving on from this, we also added league tables for members to assist in running and providing friendly competition against our peers. It will be interesting to see how this performs this year. We will increase from 4 to 5 leagues to tighten the ability of the runners into smaller time gaps. More information will be shared on this by Jon Wolfe.

We had a full update from Cass and the 10km Race Team Crew, as the race grows in popularity every year and provides invaluable income and good press for our relatively small club. A big ‘thank you’ goes to Cass and the team for all their hard work.

Due to the increase in England Athletics subscriptions, which form 50% of your actual club membership payments, it was voted to increase our subs for all members by £5.00, which means that 2020 subs will be £35.00. This will be payable by end February.

The Monday run, which has been starting from Saxon Hill, will return to its starting point of Morrison’s car park in Lichfield in due course, as numbers have not increased as a result of the change.

Finally, a Lichfield 5km parkrun will start in January. Although the club doesn’t manage this event, we may occasionally ask for volunteers so please help if you can.