On Sunday 19th June, seven LRC runners took their places among the 1046 entrants in the Derby Ramathon half marathon. The weather conditions were fantastic considering the heat of Friday and the rain on Saturday, so everything was set for a great race. The route was expected to be a fast one as it is relatively flat, however a large stretch of gravel paths put paid to more than a couple of PB attempts.

Leading the team home was Dan Turner with a new PB (beating his Dad’s Half Marathon PB in the process!) Next was Matt Orford who paced Ryan Simms round the course; Ryan managed another amazing time, just short of his sub 80 minute PB. Next was Joe Goodwin, who managed to knock another 10 seconds off his PB! These four runners all finished within 70 seconds of each other.

After a few more minutes had passed, Dave Sanders crossed the line in a 2022 best time, a little slower than he had hoped, but still an improvement over the previous two half marathons this year. Next to cross the line was Konrad Wainaina, who despite forgetting to bring his watch, managed to run just 2 seconds slower than his previous half marathon time. Bringing the team home was James Coombes, on his continuing journey back to full fitness.

Below are the times and placing in full.

Well done to all Lichfield runners on an amazing set of team results! 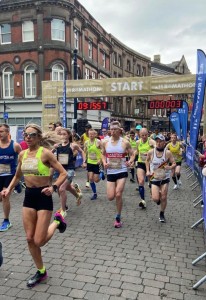 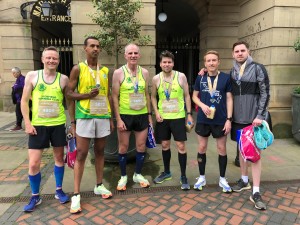 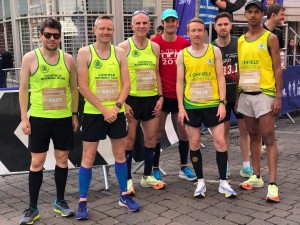