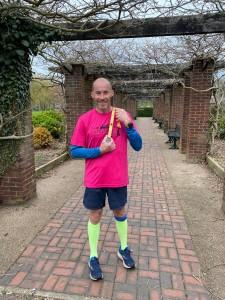 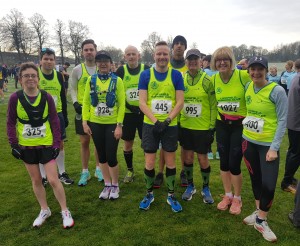 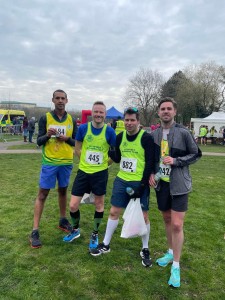 Barely seven months after the postponed 2020 race, which finally took place in September 2021, the Cathedral to Castle 10 Mile Multi Terrain Run (or ‘Cathedral to Castle’ as it is affectionately known) returned on Sunday 3rd April, an unusually cold spring day. Organised by the local Rotary Clubs, and always popular, the race is a major fundraiser for their charities. As it forms part of the Burton and District Summer League competition, there was good representation from local clubs, including our own LRC.

After local charity fundraiser, ‘Blind Dave’ Healey, started the main race at 8.30, runners completed a circuit of the football pitches, before looping round the Cathedral, exiting Lichfield and heading off towards Whittington. After an off-road section through Hopwas Woods, the final part of the race took runners through the streets of Tamworth to the finish line in the castle grounds.

Our runners pushed hard throughout, recording several PBs over the distance. In a fantastic performance, Ryan Simms came in under an hour, 4th overall, in a time of 59:45, followed by a resurgent Dave Sanders (1:06:17 – 23rd) and rising star Konrad Wainaina (1:06:33 – 26th). James Coombes (1:10:59 -52nd) completed the men’s quartet, who picked up third prize in the team competition for their efforts.