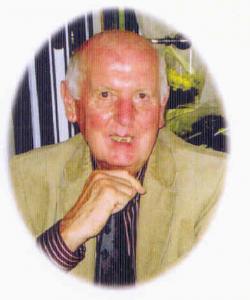 Mike was born in Lichfield on 4th. July 1936, he spent his youth attending local schools, where he was introduced to sport, mainly playing football and cricket for many different local teams. His working life, again started in Lichfield and when he was called up to carry out his National Service, he even started his training at Whittington Barracks, although, a drafting to Jamaica made many of his friends envious. On completion of serving his Country, Mike returned to work at Tuke & Bell in Lichfield, and the love of his life, Geraldine. They were married in 1961 and over the next few years, firstly Paul was born and then Claire to complete their very loving and close family unit.

During the early eighties, Mike, like many others, was inspired by watching the First London Marathon, he decided that one day he would join the few thousand competitors and run it himself, never thinking, it would be another twenty eight years, before ill health stopped him from running. We first met Mike following an article published in the Lichfield Mercury showing David Lawton, and suggesting any one local who was intending to run London should meet up outside the Greyhound Public House on a Sunday morning so that we could train together. On Wednesday evening 26th, January 1983 at the Acorn Public House, Lichfield Running Club was formed and Mike became a committee member.

In total Mike ran London five times with a best time of 3.38. He has also run many others, including Wolverhampton, Birmingham and the 1983 Peoples Marathon. In 1986 and 1987 he ran The Great North Run, and in 1990 I had the pleasure of running with Mike and both our daughters in the Dove Dale Dash in the Peak district.

Mike was a very quiet person, however, he really surprised us all during one of the London events, when he took a rose from the dining table at the Spaghetti House restaurant where we were all holding our pre-race dinner. Next day he ran for over twenty five miles carrying the rose in his hand until he saw Geraldine on the side of the Mall, and forsaking a PB, he stopped running to present the rose to Geraldine to celebrate her Birthday.

Sorting through his loft one day Mike came across a rose bowl he had won, he presented it to the club, and it is now presented annually to a club member who has carried out an outstanding running performance during the last twelve months.

Mike had to give up running in his early seventies, when unfortunately, due to illness he became unsteady on his feet, he was still pleased to see us though and on occasions while he was able to use his walking frame we would enjoy a natter and a pint at a local pub, then in his wheel chair we managed to see such sporting events as the local stages of the Tour Of Britain cycle races, and lately having coffee with him and Geraldine at their home. It must have been hard for Mike to except that we were still able to run, jog or even stagger around the roads, but not once did we ever hear him complain, Mike was alert to the end, always wanting to know the latest club news, that had not been published in emails or on the club web site.

On behalf of all the club members, who, over the years have known or run with Mike hundreds or even thousands of miles, we would like to say, thank you Mike, it has been a pleasure knowing you.

You will never be forgotten,